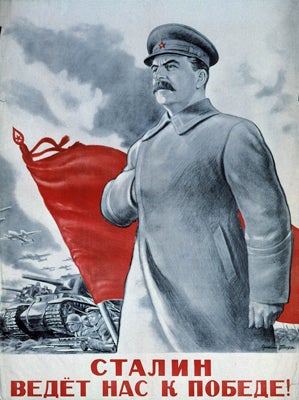 Welcome! Students in History 23N are welcome to explore our collections below!

Presentation slide for this class

Not sure where to start? You can also explore the Soviet Union Collections Page or see below!

Graves (William S.) papers - Correspondence, reports, monographs, and photographs, relating to the Allied intervention in Siberia, 1918-1919. A table of contents listing each document begins each folder.

Register of the John Barron papers - Correspondence, reports, notes, speeches and writings, and photographs, relating to Morris Childs, Federal Bureau of Investigation informant within the Communist Party of the United States; Federal Bureau of Investigation surveillance of the Communist Party; and the relationship between the Communist Party of the United States and the Soviet communist party and government. Includes some papers of Morris Childs. Used as research material for the book by John Barron, Operation Solo: The FBI's Man in the Kremlin (Washington, D.C., 1996).

Archives of the Soviet communist party and Soviet state microfilm collection: State Archives of the Russian Federation (Gosudarstvennyĭ arkhiv Rossiĭskoĭ Federat͡sii - GARF) - Relates to political conditions in the Soviet Union from 1917 to 1991. Filmed from finding aids and holdings dating from 1903 to 1991 of the Gosudarstvennyĭ arkhiv Rossiĭskoĭ Federat͡sii.

Archives of the Soviet communist party and Soviet state microfilm collection: Russian State Archives of Social and Political History (Rossiiskii gosudarstvennyi arkhiv sotsialno-politicheskoi istorii - RGASPI) - Relates to political conditions in the Soviet Union from 1917 to 1991. Filmed from finding aids and holdings dating from 1903 to 1991 of the Rossiiskii gosudarstvennyĭ arkhiv sot͡sial'no-politicheskoi istorii.

Overview of the Sergei L'vovich Sedov letters to Genrietta Mikhailovna Rubenshtein - Relates to conditions in the Soviet prison camp in Krasnoyarsk, Siberia, where S. L. Sedov was confined. Letters written to his wife. Includes typewritten translations. Also available on microfilm.

Okhrana records, 1883-1917 - Intelligence reports from agents of the Russian Tsarist secret police ("Okhrana") in the Paris office and the field, dispatches, circulars, headquarters studies, correspondence of revolutionaries, and photographs, relating to activities of Russian revolutionists abroad.

Ukrainian pictorial collection - Photographs of various scenes from Ukraine, and especially of demonstrations for Ukrainian independence, and of Ukrainian government officials and governing bodies in session.

Soviet Union Collections Guide - the Hoover Archives hold a number of significant collections relating to Soviet dissidents and defectors, such as Andrei Siniavskii, Aleksandr Ginzburg, and Yuri Yarim-Agaev. The NTS Samizdat collection of illegal underground publications is one of the most extensive collection of this kind in the world.

1930s Famine: Laubenheimer, Alfred. Die Sowjetunion am Abgrund! (1933) [The Soviet Union on the Precipice!] – report on famine in Soviet Union/Ukraine by German engineer and eyewitness, includes photographs with captions in German, English, French.

Industrialization: USSR in Construction (1930-1940, 1949) – Large-format illustrated monthly with large-scale photographs, many by noted Soviet photographers, each number devoted to one specific theme/project related to Soviet industrialization and economic development. Multiple boxes. Under a separate SearchWorks entry, you can also order some issues in French. This Russian-language publication, available at Green Library, contains reproductions of a (small) part of the visuals from different numbers.

Terror/Fight Against “Enemies”: V. Molotov. Uroki vreditelʹstva, diversii i shpionazha i͡apono-nemet͡sko-trot͡skistskikh agentov (1937) -- English translation: Lessons of the Wrecking, Diversionist and Espionage Activities of the Japanese-German-Trotskyite Agents – Molotov’s report to the Party’s Central Committee on the sabotage and terror in which the inveterate enemies of the Soviet Union engage. Quotations from testimonies and "confessions" are woven into master-narrative on the inevitable, predictable escalation of international class struggle. Russian brochure printed in one million copies (excerpts from this report were also published in multiple Soviet newspapers and elsewhere)

Forced Labor (GULAG): International Entente Against the Third International. Monthly Documentation. (1931). Special Issue February 1931: “Forced Labour in Soviet Russia” – based on information from various contemporary press reports and firsthand testimonies available at the time. Publication by international anticommunist organization based in Switzerland with chapters in many European countries.

Forced Labor (GULAG): Maksim Gorkii et al. Belomorsko-baltĭiskiĭ kanal imeni Stalina; istorii͡a stroitel'stva (1934) [The White Sea-Baltic Canal in the name of Stalin: the History of its Construction] – original edition of the (in)famous, collectively authored propaganda volume on the superiority of the Soviet system of “corrective labor” on the example of the construction of the White Sea-Baltic Canal. Multiple photographs. Also available: English-language edition with, however, partially changed and shortened text and far fewer photographs.

Forced Labor (GULAG): Greife, Hermann. Zwangsarbeit in der Sowjetunion (1936) [Forced Labor in the Soviet Union] – brochure on forced labor in Stalinist camps. Uses pictures from Gorkii et al., Belomorsko-baltiiskii... (cf. volume above), and embeds them in fiercely anti-Bolshevik and anti-Semitic narrative. Appeared in series of anti-Bolshevik publications published by “Institute on the Scholarly Research on the Soviet Union” in Berlin.

Military Propaganda: The Red Army and Navy (1939) – English language illustrated folio volume, showing the might of the Red Army as well as the happy, wholesome life in Socialist society in which it is embedded.

Stalin Cult: Stalin (1949) – no. 12/1949 of the illustrated monthly USSR in Construction (see above). Devoted entirely to Stalin, whose 70th birthday was celebrated in December 1949. This is the German edition. The same issue in English should be available here.

Holmes, Walter M. The Wreckers Exposed in the Trial of the Counter-Revolutionary Industrial Party. Workers' Library, 1931.

Forced Labor (GULAG) [EXTERNAL RESOURCE]: Interactive Online Map of Corrective Labor Camps during Stalinism, created by Russian Gulag Museum (Russian and English language options). Visualizes and maps data on the numbers and mortality of prisoners in “Corrective Labor Camps” from the archival collection r-9414 at the Russian State Archive (GARF), most of which is available on microfilm at the Hoover Archives. Circles are centered on the headquarters of camp complexes and therefore do not show how camp departments were often spread over large territories. Also, data on "Special Camps" (existed from 1947–1953) and “Corrective Labor Colonies” (camps that housed prisoners with terms of less than three years) is not included.

Forced Labor (GULAG) [EXTERNAL RESOURCE]: Virtual Gulag Museum – webpage created by Russian NGO “Memorial” in St. Petersburg 15 years or so ago. English language option available. Not all sections include content, and apparently the page has not been updated in a long time, yet the “Museum Exhibit” section still contains pictures and descriptions of several hundred artifacts recovered from former prison camps.

Poster RU/SU 571: Drawing of an irresponsible peasant in the middle of a farm field losing his money to the animals surrounding him and engaging in idleness.

Poster RU/SU 581: Drawing shows tractor in center of poster. Angels and representatives of the old regime flee this glorious sight in terror.

Poster RU/SU 628: Painting shows "kulak" with gun crossing himself and being blessed by priest as he is about to attack "New Soviet Man."

Poster RU/SU 641: Drawing of a male and female farm worker. Woman is calling out.

Poster RU/SU 1072: enemies of the Five-Year Plan (1929) depicts those categories of citizens who were particularly hard-hit by the Terror: priests, former "capitalists" (i.e. rich and middle class), officers and political opponents (Mensheviks)

How to Search for Digital Posters

How to Search Collections